About The Beta Man Podcast

The whole myth of the alpha male is bullshit. Scientists know it. We know it. Yet for some reason people cling to this idea and most of the advice out there is based on that premise. So what about those of us who want success tips, life hacks, and advice but struggle with how extroverted, network-y, shady, manipulative, and aggressive men’s advice is? That’s why I created the Beta Man Podcast, to provide insights on how to be successful in business, relationships, and health, without all the destructive, unhealthy stuff. In other words, how to be a great man, without being a dick.

What is a Beta Man?

The whole concept of Alpha and Beta males is a false dichotomy. Below is my definition of the ideal man, which I call the Beta Man. 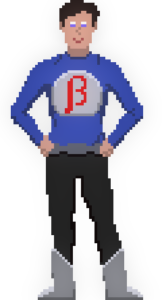 A Beta Man is someone who

Fun side note: If we think of ourselves as software, nobody would want to be an Alpha.

Alpha software is unstable and does not contain all of the features that are planned for the final version. A Beta, however, has most or all it’s features and is working out final bugs and improving those features. Being a beta sounds a lot better to me!

Who is Jase Lindgren?

Jase is an educator about healthy masculinity and non-monogamy, a relationship coach, and sex-positive advocate. He has trained in positive psychology, neuro-linguistic programming, Emotional Freedom Technique, consent education, and Buddhist mindfulness practice. He has worked with the government and celebrities on HIV public awareness in Russia, is a long-time fan of podcasts, and has been a host of the Multiamory Podcast since 2014. Jase believes it’s OK to be soft as well as strong and that you can be successful without putting others down. Happiness is not created by dominance or by conquest. There are great people in the world who are examples of this and Jase is excited to showcase them on this podcast.

You can email Jase at contact@thebetaman.com