I am a white male who can pass as heteronormative in public, which means I have a lot of privilege and safety, and there’s nothing I can do to change that. The only thing I can change is what I choose to do with that power. I know that not everyone will be able to relate to this article, but my hope is that it will be meaningful for those out there, like me, who want desperately to make the world a better place even though we are part of a demographic that is the source of a lot of the discrimination, racism, sexism, and queer-phobia in the world. As Stan Lee and Steve Ditko famously said in the first Spider-Man story, “with great power there must also come–-great responsibility!”

What does it mean to be manly?

Our culture is full of comments about “being a man”, is obsessed with masculinity vs. femininity, and boys are raised to know that they have to be manly (and if they aren’t, there can be very harsh social and physical consequences), but what does it actually mean to be manly? If you were to ask 100 people to define masculinity you will likely get 100 different answers, and you will find that those answers range from being very positive-sounding to extremely negative, depending on the point of view of the respondent.

That said, here is a brief list of some of the most common phrases and words that seem to come up:

How do you feel about the words on this list? For me, I often feel inadequate when I compare myself to these traits; I don’t have enough money, I’m not strong enough, I’m not sexual enough, etc., etc. Many men go through life never questioning these things and, as a result, constantly feel like they are failing. Sadly, the result of those feelings often comes out in sexism, violence, or some other destructive behavior. The qualities of manliness also have a lot of contradictions. We are shown movie heroes who focus on vengeance, punishing villains, killing bad guys, or being incredibly wealthy but then who are told they need to be gentle, civil, have self-restraint, and not to be greedy.

I have seen these contradictions really show themselves when we look at something like polyamory. Is being polyamorous manly or not? Many non-poly people can look at a man with multiple partners and say, “Wow, he has multiple women; he is such a man.” (Interestingly, depending on their tone of voice this could be either a compliment or an insult.) On the other hand, they could look at him and see that he “lets” his women have sex with other men, which is not seen as manly (and can often lead to ridicule or insults).

As we can see here, both the negative and positive responses to a polyamorous man are based in the idea of ownership and control and, sadly, the object that is being owned and controlled is another human–a woman. As polyamorous men, this is our opportunity to play the strong, intelligent role and lead as an example. In the face of insults or accusations, we have an opportunity to own our power, stand tall, and state that being a man doesn’t mean controlling someone else and, in fact, it takes more courage and confidence to let go of that control.

Which brings us to the next topic: standing up for those who are less privileged than we are. 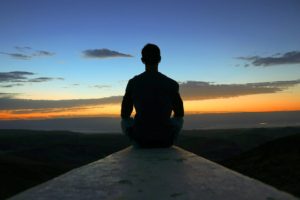 In the book Shambhala: The Sacred Path of the Warrior, Rinpoche Chögyam Trungpa explains what it means to be a Warrior with a capital W. Being a Warrior is not about fighting, waging wars, or violence, but instead is about being fearless and having the courage to constantly work toward the betterment of the world and ourselves. It’s a commitment to bravely accepting and facing the sorrows and hardships in the world without needing to hide from them or protect ourselves from those feelings. This is not something limited to just men, but I have found it to be a helpful example of what true strength and courage look like.

As a (cis) man, especially if you are white, you have much less to fear on a daily basis than many other people. Just like Peter Parker didn’t choose to gain his superpowers, your white male-ness isn’t something you have chosen, but it is a gift you can use to enact good upon the world. Peter Parker made the brave choice to become Spider-Man and help the world when he instead could have just used those powers to benefit himself.

So what can we do to help? Perhaps the most important thing you can do is to speak up when you notice discrimination, racism or sexism, even in a joke. That might seem simple, but there’s a trick to doing it effectively. The trick is to avoid arguing or trying to convince them to agree with you right then.

“Wait, what?! But they are wrong! We can’t let them get away with that!” I hear you saying. Believe me, I understand that feeling, and it is a constant struggle for me not to react that way, and I don’t always succeed. But why is this important? Well, it’s based both in long-understood political and social science, as well as some new research that has just started coming out.

Basically, by trying to argue or convince someone to change their mind about a long-held belief, you actually make them more firm in their opinion and less likely to change. This has been called the backfire effect and it’s the reason why political campaigns don’t focus on changing people’s minds but only focus on getting the people who already agree with them to go out and vote. This may seem hopeless at first, but a new study has shown that by simply having a short conversation with someone that presents a different way of looking at the world through your personal experience (and NOT trying to convince them) you can actually change their opinions in the long-term. The study was done specifically with attitudes towards transgender people. You can read more about it here, but the takeaway is that the most effective thing you can do is simply to humanize something and make a personal connection, not to argue or present facts.

So, in our role as privileged, powerful men, we have two great responsibilities. The first is to step in and actively defend someone if they are being physically assaulted or threatened. The second is to speak up when we hear discriminatory ideas being presented, but to keep our cool and share another way of looking at something, whether it’s our opinions about having women in leadership positions, respecting an individual’s right to choose their gender identity, the role of Muslims in society, or anything else. It may not seem like much, but just by expressing a different opinion, you are planting seeds of change and weakening the hold of those discriminatory, toxic beliefs.

In the aftermath of the recent election, I have seen a lot of articles and blogs written by both white and non-white authors who have been saying things like, “Us white people have failed because we are what got Trump elected,” or, “You white people, you all share responsibility for this,” or, “It’s men’s fear of women that got us here.” These are usually followed up by quoting statistics about how the only racial demographic that Trump won was white and that white people make up the majority of voters in the U.S. or that more men than women voted for him. The prevalence of this kind of language and thinking is deeply troubling. To say that all white people or white men are responsible for Trump getting elected is exactly the same logic as saying that all Muslims are responsible for Al Qaeda or that all black people are responsible for gang violence. When I’ve discussed this with my non-white friends who understand they still respond by saying, “Yeah, this is the first time white people are experiencing that kind of racism,” but they don’t have a lot of sympathy in their voice… And perhaps they are right not to feel much pity. After all, they’ve had to deal with this kind of stuff their entire lives.

Let me be VERY clear about something here: This is not a time for white people or men to paint ourselves as victims or to get defensive. Like we explored in the last section, minds are not changed by arguing. They are changed by personal experiences and conversations. This is a time when we can embrace our strength and our courage to be vulnerable, understand the hurt and injustice that is so prevalent in our world, and resolve to change it, not through violence or aggression, but by making a commitment to be our best selves and supporting others to do the same. Sometimes this might be hard, but by cultivating the skill of pausing before reacting, you can make a much more powerful and positive impact on others — allies and opponents alike. When you are confronted with someone blaming you (and everyone like you) for racism or sexism, take a breath, allow yourself to feel their hurt, acknowledge it, and ask what you can do to help (no matter how much you might want to reply with indignation or frustration).

Part of this skill is understanding that doing what’s right is not always comfortable, and it doesn’t always feel good. Being aware of other people’s experiences and fears can be painful, but the true Warrior doesn’t back away from that sadness. He accepts it as part of his duty. Fearlessness doesn’t actually mean a lack of fear, but an acceptance of it, and the choice to continue anyway.

In processing my feelings and reactions to everything that’s going on, the anger and frustration I see on Facebook, and my own worry, I wrote a poem. That’s not normally something I do, and I’m terrified to actually share it with anyone, which I guess is exactly why I think I need to do it.

But though my heart may be broken, I am not broken.
I will not stop being compassionate, even those who disagree with me.
Even those who might wish to hurt me.
I will not blame people who are afraid of me because of my appearance.
Because hate only grows more hate and division only creates greater division.
I will do my best to protect those in danger, even when I’m scared.
I will show compassion to those who disagree with me, even though I may want to hate them.
I will remember that hate grows out of fear, and my anger only creates more fear.
I know that fearlessness doesn’t mean a lack of fear but a willing acceptance of it.

Let this be my pledge that no matter how much my heart may break, I will not surrender my ideals, my principles, or my courage to do what’s right.